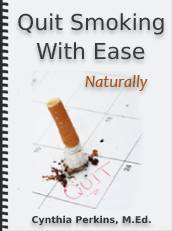 You can learn how to quit smoking naturally with ease and overcome your cravings for nicotine by addressing the true root of nicotine addiction, which is a disruption or imbalance of neurotransmitters in the brain.

People become addicted to nicotine because it is a powerfully addictive drug. Addiction to nicotine is one of the hardest addictions to overcome because it causes changes in the brain that are similar to the brain changes created by alcohol, heroin, and cocaine addiction. It is often considered the gateway drug or the drug of entry, meaning that this is where addiction originates for some people and then leads to alcohol and/or other heavier drug usage. The bold, ugly and blatant truth is that if you are smoking cigarettes, then you are a drug addict.

In your brain, you have chemicals called neurotransmitters. They are what the brain uses to facilitate communication from cell to cell. Among other things, neurotransmitters regulate our mood states, behavior, memory, cognitive functioning, weight, sleep, and pain perception and response. In order for everything to run smoothly, these powerful neurochemicals must remain in balance. Too much or too little of any one of them and a host of psychological and/or physiological symptoms will manifest, like depression, anxiety, cravings for stimulants like nicotine and caffeine, cravings for sugar, alcohol, or other mind-altering substances, hyperactivity, attention deficit, memory disorders and much more.

Nicotine targets many neurotransmitters in the brain like acetylcholine, serotonin, endorphin, dopamine, and more. The brain responds by reducing the number of receptors for these neurotransmitters, which means you now require more and more nicotine to achieve the same results. This is called tolerance. Over time, as this pattern continues, the brain stops making neurotransmitters on its own and becomes dependent on nicotine to mimic their effects. When you try and give up the nicotine, you experience withdrawal, because neurotransmitters are now depleted. The only way to function normally or feel relaxed, pleasure, etc., is to have a cigarette.

Your brain becomes dependent on nicotine to function properly. Thus, why you feel so bad when you try to quit smoking. Because, when you stop smoking, the brain doesn’t automatically begin to make the neurotransmitters again on its own. It takes time for the brain to recover — months or years. However, you don’t have time, because the lack of neurotransmitters makes you so miserable that you pick up another cigarette to feel better.

At this point, many people feel powerless over their addiction, but that is an illusion. Your behavior and choices are being dictated by your disrupted brain chemistry. Therefore, you can regain your power simply by correcting the brain chemistry.

What You'll Learn in Quit Smoking with Ease

With proper diet, changes in lifestyle, nutritional supplements, and stress management techniques that encourage healthy neurotransmitter production and function you have a complete program that will help you quit smoking naturally with very little discomfort and help you maintain long-term abstinence without cravings.

When you use these holistic ways to quit smoking, then you restore balance to your brain chemistry, which gets to the root of the problem. When disruption to brain chemistry is corrected, then cravings for nicotine cease to exist.

You Can Quit Smoking Naturally Today

As a recovered nicotine, drug, alcohol, caffeine, sugar, and food addict with more than 30 years of sobriety, I can tell you with certainty that the methods to quit smoking naturally that I will share with you are highly effective. I never experience cravings for any of my old substances of choice.

I also hold a bachelor’s degree in psychology, a master’s degree in counseling, and a certificate of completion in functional medicine from the Academy of Functional Medicine & Genomics, where I studied under Dr. Charles Gant, one of the leading-edge specialists in the field of addiction.

So, not only do you get the expertise of a trained mental health professional but the real-life experiences from someone who has actually been in the trenches of many addictions herself and found her way out.

After a long battle with addiction to many substances, crippling anxiety attacks, and depression, I found my recovery with the blueprint that I share with you in this eBook.

Don’t waste your time or money on prescription drugs or other ineffective hyped-up miracle cures, because as we all know, your life really does depend on making the right choice.

The most effective, easy, and painless method to overcome nicotine addiction is to go directly to the root of the issue by restoring balance to brain chemistry.

You are not powerless. You are not a slave to your nicotine cravings. You can quit smoking today!