Something about fall gets me in the mood to try out new things in the kitchen and I came up with this delicious cinnamon, peaches and cream recipe that I think you will enjoy as well. 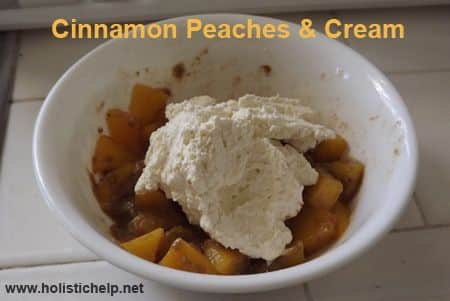 I have tried both pecans and walnuts and either one tastes delicious. You could try almonds or macadamias as well for variety.

This is so completely satisfying and scrumptious that you will truly feel like you are in paradise and it will also derail an intense carb craving.

Cream contains no carbs, so this food can be eaten by itself, or sprinkled with a few nuts, if fruit produces too many symptoms for you. Additionally, it can be eaten more freely than other dessert recipes and will also satiate many carb cravings.

The cinnamon, peaches and cream dish is very low carb, so it is another great choice for anyone trying to lose weight or dealing with Candida overgrowth, sugar addiction, compulsive overeating, insulin resistance, anxiety, depression, adrenal fatigue, or any other condition affected by sugar.

Like the Strawberries & Coconut Cream Recipe, this is also very easy to accidentally overeat and feel too full, so be careful to quit eating before you start to feel full.

Need help incorporating the Paleo diet into your life? Then you’ve come to the right place. Head on over to my coaching/counseling page and get individualized help today.